Saturday stars came in number at the Festival

The second day of the Monte-Carlo Television Festival comes to an end. Relive the strong moments in emotions of this one. This second day at the Festival was marked with many events.

The exchange was marked by many laughs and smiles between festival-goers and celebrities. A real dialogue took place and we could feel a complicity between them. The luckiest aficionados of the series have even had selfies with their favorite stars!

At the same time, the lucky holders of the #OMG card met Oliver Stark in the "9.1.1" series.
They were able to ask many questions to which the actor responded brilliantly. The actor has also left the suspense about the end of season 2 of the series that looks apparently very dark for his character. He also mentioned being vegan as well as being a fervent animal advocate.

A little later, a meeting in the presence of actresses Sharon Case, Amelia Heinle and Camryn Grymes of the legendary series "The Young & the Restless" took place at the Monte-Carlo Television Festival. The actresses have revealed to the public, curious, not to be bored in their respective roles, though the soap opera lasts for so long, because their character evolves permanently. Camryn Grimes, meanwhile, unveiled that a future event would change the destiny of her character but she did not want to say more! The meeting even ended with an impromptu photo shoot between the fans and the three actresses.

Jaina Lee Ortiz, who stars as a firefighter in the "Station 19" series, also went to meet her fans during an interview. The actress told the audience that the most difficult scene for her to play was one that has not yet been aired, in which she was forced to play underwater at 14 feet deep!
She also described the studious but also family atmosphere of the shoot. Jaina, who often plays very masculine roles (Policewoman, Marine, Firefighter ...), emphasized their feminist side because they show that women are also able to play men's roles and to highlight the women who make this type of trades in real life.

At noon, an exceptional dialogue brought together Dick Wolf, Missy Peregrym, Ebony Noel, Jeremy Sisto, Zeeko Zaki and the festivalgoers for an exclusive screening of the first episode of the new series of the legendary American producer, "FBI". A Q & A session allowed viewers to learn more about the actors and the soap opera: for example, the actors had to learn a lot about the FBI and how to do the agents in order to really get in the gameskin of the characters. The meeting was marked by many laughter and we could feel the friendship between the actors.

The festival-goers holding the #OMG card were able to meet Ryan Eggold and Freema Agyeman of the "New Amsterdam" series. The actors, very close to the public, answered all the questions asked by the fans of the series and told many anecdotes of filming. They also confessed that they had to learn how to speak like doctors and how to act as such to play realistically in the soap opera.

Then came a Behind The Scenes from the "Pékin Express" French show that is coming back this summer on M6, for a season 12! Stéphane Rotenberg, host of the show, Thierry Guillaume the producer, Ludovic Daxhelet big winner of the season 8, Mehdi participant of the season 11 and Hoang of the season 5 were attending to talk about the secrets of the shooting.

As soon as they arrived in the Camille Blanc room of the Grimaldi Forum, Stéphane Rotenberg, Mehdi and Ludovic immediately relaxed the atmosphere by making the audience laugh and by creating a complicity with the spectators. An excerpt from season 12, to be broadcast this summer, has been screened. This preview of the show, which begins in Guatemala, showed that "Pékin Express" would begin in an unusual way, candidates will have to go on an adventure in the middle of the night! Passes of "Itinéraire Bis" (which will follow "Pékin Express" in the second half of the evening) and "French Tour" (soon to be aired on 6Play) have also been broadcast.

The beautiful and famous Poppy Montgomery then met her lucky fans: the owners of the #OMG card! Many applause greeted her. The actress, very close to her fans, talked about her new series "Reef Break" in which she plays a criminal and not a police officer as she was used to in "Without a Trace". This new soap opera, which will be released shortly on M6, is still very close to "Without a Trace" with the only difference that "Reef Break" is a series much more glamorous and fun!

At 17h, SLA PARIS, the official make-up artists of the Festival, who usually take care of the stars, offered glamorous makeups to the festival-goers. The latter had to choose the part of the face that they wanted to be made up (the complexion, the eyes or the mouth). Each participant left with a beautiful happy face.

To end the day in style, the first episode of the new TF1 series, "Le Temps Est Assassin", was premiered. Mathilde Seigner, Valeria Cavalli, Thierry Godard, Catarina Murino and Stanley Weber were attending. Aline Besson and Isabelle Drong, the producers of the program, thanked every actor and spoke about the creation of the program which lasted two years, from the writing to the end of the shooting. They also made a short summary of the series that tells the fates of several women who have to fight with or against what they have inherited. The screening then took place and ended with public applause, the audience was then invited to ask many questions.

Yesterday's day has ended, let's see what we have today!

Day 3 at the Festival!

The 59th edition of the Festival continues. Many surprises await you for this third day! In the morning, you will have the opportunity to meet, from 10… 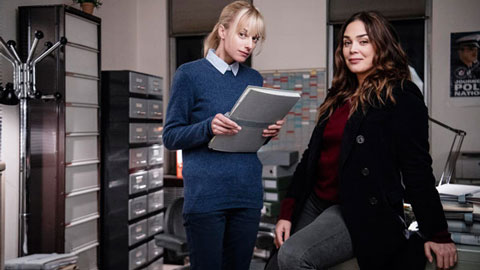 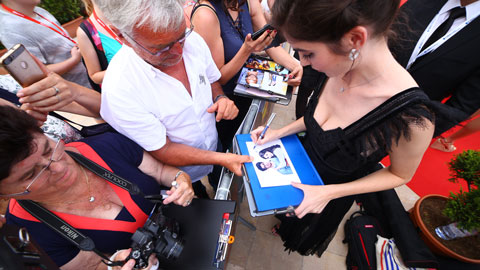 Fourth day at the Festival!